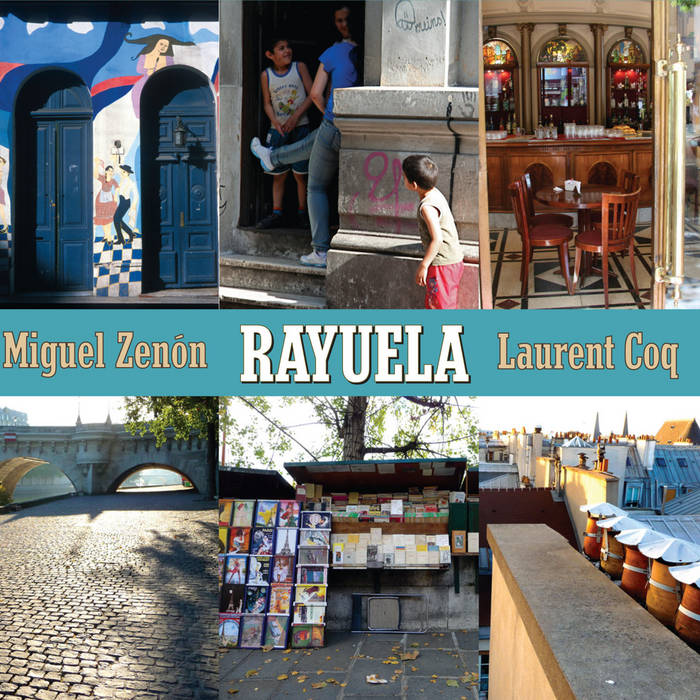 It isn’t uncommon for musicians to use literature as inspiration for their compositions. The methods by which musicians approach this task differ not only from the artist’s individual style but also that of the writer whose work they will aurally illustrate. On their new Sunnyside release, saxophonist Miguel Zenón and pianist Laurent Coq challenge themselves to capture the breadth of character, form and perspective of Argentinean writer Julio Cortázar’s masterwork, Rayuela.

Cortázar was one of the most influential writers of the 20th Century. A man at home both in Europe and South America, Cortázar’s familiarity with the mid-20th century bohemian and émigré lifestyles shines through in his famous works of fiction.

Zenón came across the author’s broadest work, Rayuela (Hopscotch), in the late 90’s. He was struck by the novel, especially its form which allows the reader to choose how it should be read: straight through, following the map which Cortázar provides or picking your own order from the 155 chapters included in the book. Since then, Zenón has returned to the book on numerous occasions.

Coq and Zenón had been looking for a way to collaborate for some time before Zenón proposed setting music to themes and characters from Rayuela, though Coq was not familiar with the novel. The immediate correlation between the collaborators and the text was the French and Latin American connection - the book uses Paris and Buenos Aires as settings; Coq hails from France and Zenón from Puerto Rico. As an additional challenge, the two musicians reverse their natural inclination of writing for the closer cultural affiliation: Zenón covers Part 1 (Paris) while Coq handles Part 2 (Buenos Aires - where he has never been).

The saxophonist and pianist enlist two unique musicians to round out their quartet. Eschewing the common bass and drums, the ensemble utilizes the tremendous cellist/trombonist Dana Leong and the masterful percussionist/tabla player Dan Weiss. This singular ensemble opens up many opportunities in the music, approaching the timbral space of a chamber group, while providing particular challenges to the composers who normally don’t write for such an unusual combination of instruments.

The composers employ a few different methods when writing this music. On some pieces, Zenón utilizes a direct translation of the text (letters and words) into music to create melodic and rhythmic patterns along with harmonic structures. On others, he uses a more programmatic approach, taking impressions from characters or episodes from the book to inspire his writing.

Coq, on the other hand, uses a method in which he harvests ideas over a span of weeks while digesting the novel, creating melodic lines, harmonic frameworks, rhythm patterns and orchestral textures that he separates into five “baskets” (one for each character). He then assembles pieces that he feels will reflect each character and pares down elements until the compositions contain a certain depth and accessibility. Coq feels that it is important to echo the ease with which Cortázar provides weight along with levity to his characters.

The compositions are not presented in chronological order as related to the novel but in an order determined by Zenón and Coq, following the idea of the novel by giving the reader freedom to interpret the work as he wishes, unconstrained by a linear approach.

Zenón’s “La Maga” portrays the complexity of the Uraguayian, Paris based lover of the main character (Horacio Oliviera) and the couple’s strange relationship, using a six-note theme derived from the letters of her name. The saxophonist then paints “El Club de la Serpiente”, an international group of bohemians and émigrés with whom Oliviera and La Maga associate – the piece features different sections representing each individual in the group, allowing the musicians to cue which theme comes next, thus mirroring the freedom of choice given to the reader by Rayuela. “Morelliana” is written in reference to Morelli, a ghost character frequently mentioned in the conversations of El Club, who is writing a book very similar to Rayuela. Zenón creates a musical map of sorts by using a letter-by-letter translation into notes and rhythms of Chapter 151 of the book (one of the many chapters presumptively written by Morelli himself).

The programmatic “La Muerte de Rocamadour” portrays the well-known chapter in which La Maga’s infant son Rocamadour dies while El Club meets at the couple’s home. The composition illustrates elements presented in the chapter, including the complaints of an annoyed neighbor, each Club member’s knowledge of the dead child that they keep mum about and finally La Maga’s ultimate tragic discovery, which prompts her to run away. Oliviera discovers “Berthe Trepat” while seeking La Maga, Trepat being a failed concert pianist that Oliviera feels sympathy for though she is a pathetic failure. The composition is a portrait of this ironically humorous episode from the book.

Rayuela begins with Coq’s “Talita,” named for the overtly confident wife of Oliviera’s friend, Traveller, who becomes tangled with Oliviera after he has delusions of her as his lost lover La Maga. The composition echoes her intensity and demanding personality. “Gekrepten” is a portrait of Oliviera’s naïve Buenos Aires lover who has a deceptively layered personality, which is mirrored by Coq’s ostinato, built with layers of themes until the main melody appears at the end. “Buenos Aires” is Coq’s fantasized attempt to capture the essence of the character’s surroundings in Part 2; hot, languid yet brash.

“Oliviera” and “Traveler” are Coq’s sketches of the main character Horacio Oliviera and his friend Manolo Traveler. Both pieces aim to depict these struggling men who fail to fulfill their strong, conflicted desires by assembling contrasting parts into creative forms.

The reason why Cortázar’s Rayuela works is that despite its complexity, it still depicts things that we all hold in common. Zenón and Coq translate this by using accessible musical elements, only to switch them up to the surprise and delight of open-minded listeners.

Bandcamp Daily  your guide to the world of Bandcamp